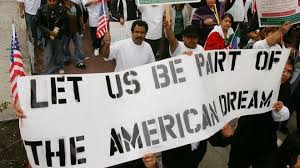 I realized today that I am not happy with the arguments I’ve heard against the border wall. Don’t get me wrong: I oppose the wall, and I oppose the fear of immigrants. But it’s not because Leviticus tells me to welcome the stranger, or at least not only because of that. It’s not because my heart breaks for those who live in fear and squalor, though it does. And it’s certainly not because I hate America, because I don’t. My ancestors founded this country on a dream, and I believe in that dream.

The reason I oppose the wall is simple: God reigns.

This is the message of the Gospel. Satan is defeated, though given a chance he will still make his mischief. Death has been defeated. Fear has been defeated. God’s Kingdom has been established, and we get to choose whether or not to be part of it.

I choose God as my sovereign. Jesus is my Lord. That means I do not give in to the fear pandered by people seeking political power in this world. They are not in charge. God is.

That means I will not bow before powers and principalities, though they may have certain powers over my life (and I accept that). It means I rebuke the demonic powers of fear, nationalism, and narcissism that infect so much of our culture.

I choose Jesus as my model. This same Jesus healed not only his own people, but a Roman centurion’s servant (Mt 8:5ff) and a Gentile’s daughter (Mk 7:24ff), offered the water of life to Samaritans (Jn 4:1ff), and held up a hated enemy as an exemplar (Lk 10:25ff). His disciples went not only to their own people, but to the Samaritans and the Gentiles. Admittedly, Jewish Christians were afraid of what might happen when these outsiders came into the Church, but James (the brother of Jesus) wisely made cultural accommodations (Acts 15:1ff). Clearly the Church would not have been the same otherwise. Its early theologians were almost exclusively Gentiles, hailing from such places as Rome, Antioch, Smyrna, Alexandria, and Constantinople. Augustine was a pagan in North Africa before becoming one of the Church’s most important theologians.

We are a nation of immigrants. (Just ask any Native American.) No one stood on the shores of Massachusetts Bay and told my ancestors, “You can’t come in without the right paperwork.” On another side of my family, my grandfather came from Ireland on a visa, but he overstayed it by 50 years before he finally got right with the law.

Some will argue, “But that’s England and Ireland. They’re different.” I could reply that when my grandfather came, NINA (No Irish Need Apply) was a common sign in American businesses, and people debated whether or not the Irish were really white. They were characterized as criminals and drunks. They were supposed to be a bad influence on American society. But yesterday’s enemy has become part of the fabric of our nation.

I think it’s more important to appeal to Paul:

There is neither Jew nor Gentile, neither slave nor free, nor is there male and female, for you are all one in Christ Jesus (Gal 3:28).

Those who say, “I love God,” and hate their brothers or sisters, are liars; for those who do not love a brother or sister whom they have seen, cannot love God whom they have not seen (1 Jn 4:20).

And I am called to do it without fear, because God reigns.

I am the child of immigrants, some more recent than others. That suggests compassion.

I am a follower of Jesus of Nazareth. That demands more.

This country will do as it wills. But as for me, I refuse to deny the Lord who lifted me from darkness. Jesus is Lord. God reigns. I submit.