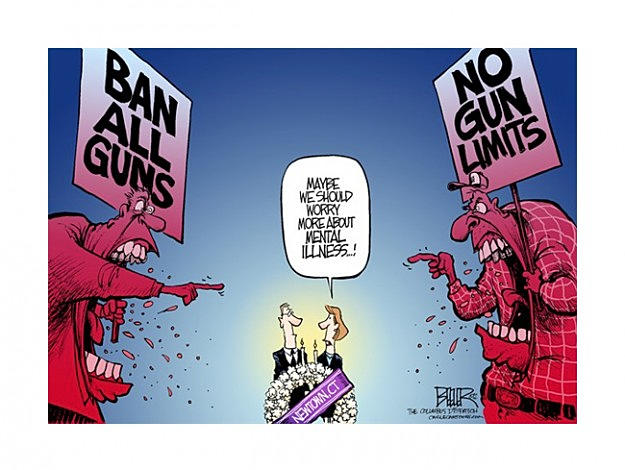 I’m going to make a statement that will likely get me crucified by conservatives and liberals alike. Here goes: If you argue that the solution to gun violence is more guns or less guns, you are responsible for the deaths of tens of thousands of Americans.

That’s because focusing on the symptoms of a disease doesn’t cure the disease. And America has a disease. It’s called untreated mental illness.

Ever since the national mental health system was dismantled under Ronald Reagan, our country has increasingly suffered from undiagnosed and untreated mental illness.

It’s not just crazy gunmen. They’re the ones that make the news. But we live in a country where schizophrenics intentionally get arrested because jail is the only facility that will care for them, where PTSD sufferers live on the street because, even though they can’t work, they aren’t “sick enough” for admission to an institution, where bipolars who need six weeks of hospitalization to balance their meds get kicked out in 5 – 7 days because their insurance won’t pay for more, where mental health hotlines go unanswered, where GPs administer psych meds because psychiatrists are unavailable or too expensive, and where the suicide rate is more than double the homicide rate.

The recent wave of mass shootings is a clear sign of how sick we are.  Yet it’s only the visible tip of an unseen iceberg.  Mentally ill people don’t look different from anyone else.  We can’t see them.  We don’t count them.  At least, not until they’ve committed harm to another person.  And there are literally millions of them.  No one knows exactly how many, because too often we don’t diagnose them anymore.  But we can see from the suicide statistics that we are not a healthy nation.  Suicide is the 10th leading cause of death in this country, and the third leading cause of death among 15- to 24-year-olds.  Veterans are reported to make up 20% of the suicides each year.  And the overall suicide rate is rising.

If you need more evidence, check the stats for antidepressant prescriptions.  CDC reports that 11% of Americans take them!  NAMI reports that one in four adults – 25% – experiences a mental illness in a given year. That’s an astounding figure!

Yet we spend our time arguing about guns.

Our mental health system is a travesty.  When Reagan dismantled the national system, the states were supposed to pick up the slack.  They didn’t.  They had neither the funding nor the inclination.

What bothers everyone else seems to be fear of getting shot.  So let’s face the truth: mentally balanced people don’t shoot each other, or attack each other with knives or hammers or hatchets or any other weapon.

While gun opponents and proponents argue, Americans are getting killed.  So please: shut up and let’s talk about mental health.