Violence, Nonviolence, and the BLM

The confrontation going on here in the Southwest has been described by some as a Range War.  The Bureau of Land Management (BLM) is rounding up cattle belonging to rancher Cliven Bundy.  Regardless of the legality or illegality of the roundup, the BLM has displayed little concern for the health of the cattle and their calves, many of which have died in the desert as a result of the roundup.  They have trampled on some of the most basic civil rights, arresting a man for filming the roundup, and tasering an unarmed protester.  Meanwhile, supporters are gathering at the Bundy ranch from all over the country.  Commentators describe BLM abuse as symbolic of a totalitarian government that sees its own people as the enemy.

I can’t disagree.  From NSA spying on its own people, to SWAT-style raids on dairy producers, to a skewed tax code that favors the rich, I believe our government has lost its way.  It no longer listens to its people, and it has no interest in local issues or voices.

That said, the outcome of the BLM/Bundy confrontation is as yet undecided.  On the one hand, some of Bundy’s supporters were active in the Civil Rights Movement and promote nonviolence.  On the other, ranchers and even militia members who support Bundy are reportedly bringing firearms to the ranch.  Firearms in and of themselves don’t scare me – as a rancher myself, I have them and use them.  What concerns me is the potential for this confrontation to explode into violence – and the damage that would do to the causes at issue, and to the nation as a whole.

I spent many years working in Sri Lanka, a nation that was then at war.  I studied the roots and history of that war, and I worked to bring it to a peaceful end.  I would like to offer some of the insight I gained in the process.

In 1961, a group of Tamils began a satyagraha – a Gandhian-style civil disobedience to call attention to their grievances.  The Sinhalese-dominated government sent in troops to break up the satyagraha, which they did by arresting the leaders, beating supporters, and burning buildings in Tamil areas. 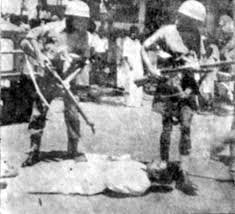 For many Tamils, this signified the defeat of nonviolence.  By 1975, Tamil youth had begun to take up arms against government installations such as police and banks.  By 1983, a full-scale civil war was underway.  Over the next two decades, the war would kill over 100,000 people, most of them noncombatants.  The LTTE rebels were ruthless against not only the government, but anyone they considered a threat.  They used the Cycle of Violence to gain support and outmaneuver the government.  Their force of (at most) 10,000 was able to stand effectively against an army that eventually numbered 240,000.

For its part, the government used the war to dismantle civil rights protections, assassinate opponents, and eventually dismantle many of the democratic institutions in the country.  Then, in 2009, it began an all-out assault on the LTTE and Tamil civilians.  The death toll was staggering.  They even refused to accept the surrender of LTTE fighters, preferring to kill them instead.  Even the Cycle of Violence cannot aid an insurgent group in the face of a government willing to kill anyone to reach its goals.

If nonviolence failed, and violence likewise failed, one might ask if there is any way to influence an oppressive government.

The answer is, “yes,” because nonviolence did not really fail.  Rajan Hoole, a Tamil historian, points out that nonviolence was put down when it was tried – once.  He suggests that if a committed nonviolent campaign had developed, the results might well have been different.

Is there any evidence to suggest that nonviolence can influence a government intent on harming its civilians?  Yes, there is.

In 1999, a Sri Lankan NGO called Sarvodaya announced its intention to end the war through nonviolent means.  Reaction in the press was skeptical, to say the least.  But Sarvodaya began a series of peace meditations, consciousness-raising events, and grass-roots organization that, though behind the scenes, was instrumental in the 2002 Cease-Fire Agreement.  That cease-fire lasted four years, by far the longest break in the war.  During that time, the shooting stopped, human rights abuses and disappearances decreased, and small businesses re-emerged.  But most surprising of all, the ruthless LTTE began to explore how to convert to a political organization.

I was a member of the Sarvodaya team.  I saw some of the most brutal effects of the war, especially to women and children, and I saw the process and the effects of nonviolence.  Please believe me when I say: nonviolence is better.

That cease-fire lasted four years, but it eventually broke down.  There are many reasons, but I think the most important is also the most painful: We, the peacemakers, dropped the ball.  We thought that when the shooting stopped, the parties would do the right thing; they didn’t.  We thought that the process would snowball without our continued work; it didn’t.  We went on to other things – I was sick for two years – while those who promoted violence were still on the job.

Peace is a fragile thing that requires constant attention to grow.  War is easier, but creates wounds that take generations to heal.  I have seen both.  I pray that our nation never devolves into what I saw in Sri Lanka.  As we consider the BLM/Bundy confrontation, let us remember that violence requires only a desire to kill; peace requires a willingness to die unarmed.  It’s a tall order, but it’s worth it.